Thinkhouse Art Director and Photographer Kevin Goss-Ross hails from the high plateaus of South Africa, but moved to Ireland in 2012, “When the Celtic Tiger’s corpse was still decomposing and the stink was thick in the air.” Clearly a fan of a tasty metaphor, Kevin’s style plays a lot on humour and storytelling. 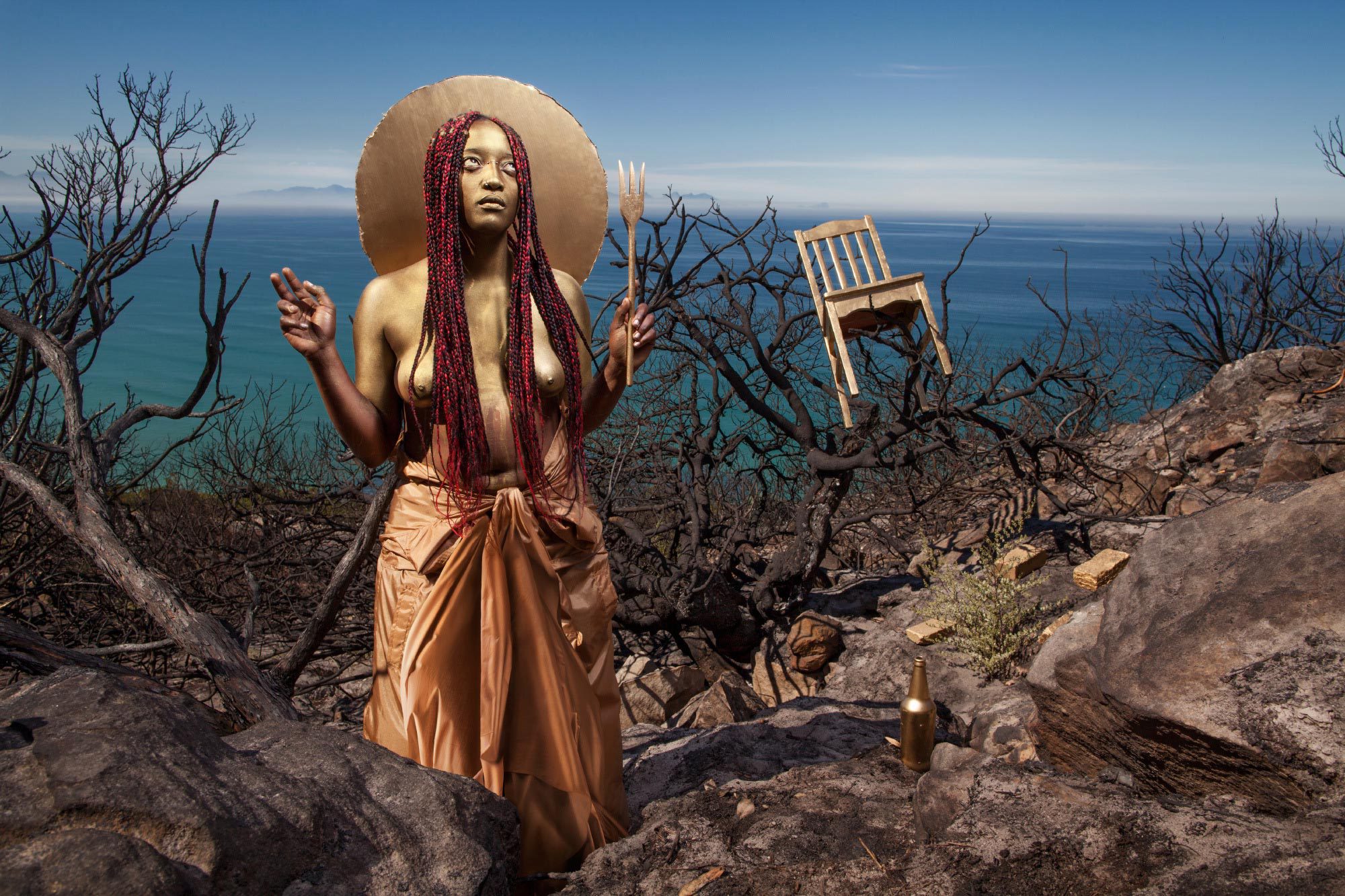 Naturally, I didn't tell @_purely_ that she'd have her boobs out and covered in gold body paint until after we'd ignored and climbed past the large, aggressive-looking no entry signs. Cape Town had recently nearly burnt down but the charred foliage looked alien and surreal and one man's fuck up is another man’s victory. We’d be forcing together folklore from two continents - the Irish Catholic Saints and the South African Tokoloshe, a fictional character of the gremlin variety. The story is that unless you keep a brick under each leg of your bed the Tokoloshe might carry you into the night or bite off your toes. The concept was initially imagined as a visual representation of my ever more confusing cultural identity as a youngish South African living in Ireland. ⠀

This is fisherman extraordinaire and Dun Loaghaire Pier local Garad O'Sullivan who lives at the nursing home on Tivoli street. We got talking while I was setting up to take a portrait of my friends who used to work at a crepe van on the same section of the pier. He was pulling out mackerel like it was nobody's business. I asked him how often he's on the pier, to which he replied "Oh, er, Mondays. Tuesdays... Wednesdays. Definitely Thursdays. Frrrridays, Saturdays and. Sundays. But no, not Sundays. But also Sundays." When he left the pier I asked him what he does with all the fish, to which he replied "I just give them to me friends", right before he showed me a where to get free chips.

Before digital burst the print bubble you could buy magazines about horses, horseriding, food for horses, using horses as food; whatever your niche interest there was a group of people ready to write about it extensively. Most of the magazines are gone now but the interests live on. Here’s a picture of UK rapper Che Lingo on a pedal car (he’s not really into pedal cars).

Moore Street is the best part of Dublin. Non safety matches, questionable produce, tax evaded cigarettes, innumerable hair extension options and strawberries for a Eeeeeuuro! It’s where I go when I feel homesick for the third world, when I need some variety in my culture or overripe bananas in my cereal. It’s also the one place in town where a cockroach would look you straight in the eye and challenge you to a dance off. Here he is looking for some fresh produce. ⠀

This is one of my favourite photographs, and unlike the majority of my work completely unplanned and not lit. I was playing tourist and went on a canal cruise in Amsterdam. As luck would have it I was stuck on a barge with what looked like a school tour. They were loud and tending to their selfies and hormones more than listening to the information, which annoyed the driver to no end. The light was amazing, and I decided to wait for him to turn around again. Nothing better than annoyed old man face.

Sneakerheadism is a polytheistic religion where multiple deities battle it out for our affection. They’re worn as far away from your face as your body can go but sneakers can tell you more about some people than their expressions. This one goes out to all those people who buy a second pair.

We shot this in the quarry behind the infamous (deceased) English colonial dickhead Cecil John Rhodes’ private zoo and (empty) lion den on the University of Cape Town campus. James ‘Bones’ Cross, a musician and model known for his unique brand of ‘heroin chic’ got into the freezing cold water and braved uneven rocks to hold a mirror. My brother assisted and also braved the cold with a flash in a Ziploc bag, an assortment of mirrors and lots of swearing.⠀

Christoffer Rosenfeldt and I were at Roskilde Festival 2014 in Denmark recently taking some professional, well lit festival portraits. I love looking for that one person who is properly festivalled out, and I think this guy just drips with the spirit of festival exhaustion.

Mirrors are so 90’s they smell like Kevin Spacey in American Beauty. As music goes back to analogue and your mom is suddenly relevant again because she owns more vinyl than you smartphones have digitized our mirrors. Whilst this is all well and good for carrying less bits it’s best to make sure you’re not live streaming your touch-ups because that’s in bits.

Check out more of Kevin Goss-Ross' stuff on Instagram

10 THINGS YOU SHOULD KNOW ABOUT MARGHERITA LOBA AMADIO

10 THINGS YOU SHOULD KNOW ABOUT MARGHERITA LOBA AMADIO

1. Margherita left high school for a few months in 2009 and worked as a post-production assistant. Later she went back to school and went...

10 THINGS YOU SHOULD KNOW ABOUT ANDREW NUDING

10 THINGS YOU SHOULD KNOW ABOUT ANDREW NUDING

1. Andrew Nuding’s favourite series is 'There’s Life in it Yet', which looks at the lives of those separate from society and the phenomenon of...

What does it mean to be ‘like a girl’? Why is ‘manning up’ all about being tough? These are the types of gender norms Chinese...

“We have the tools to play God!” - From posting on Instagram to shooting for Adidas in less than five years

“We have the tools to play God!” - From posting on Instagram to shooting for Adidas in less than five years

From humble beginnings, posting images on Instagram, Elise Swopes built up a following of a quarter of a million followers and now works with some...

In a world where everyone has a whopper camera in their pocket all the time AND their own online gallery space with an audience of...