Clothing defines us to the world in the way our thoughts and feelings can only define us internally, and in 2021, the stage is set for fashion to be more undefined by gender than it has ever been. And about bloody time. Join us now as we hotstep merrily through the ages to look at the people who’ve worn what they were told wasn’t for them, for the myriad of reasons driving them that have evolved through history.

**We had a lil fun with the title of this article, taking the french term for “ready to wear”, and bastardising the language to make it kiiiinda mean “ready - for all”, (don’t @ us francophones) and of it would be remiss of us not to mention the classic and vacuous 90s fashion film, Pret A Porter along the way. 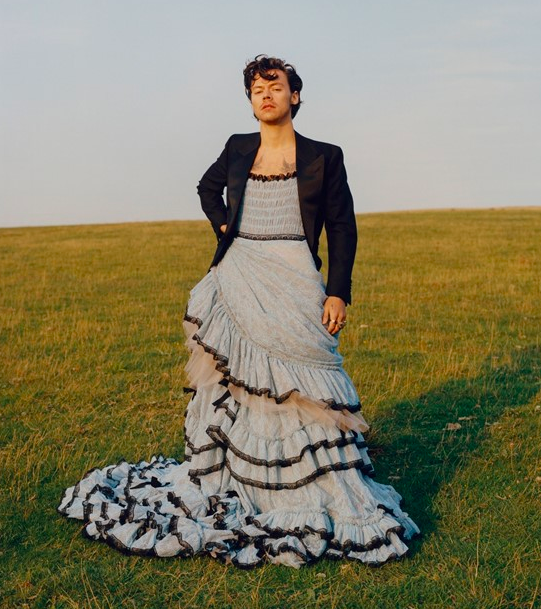 When he donned a voluminous periwinkle blue gown paired with a black tuxedo jacket and graced the cover of Vogue, people said Harry Styles made history, which was a nice way of saying he made mainstream. Because the history they speak of was made long before Harry Styles passed over his pants. And we’re not even talking about recent history, like Eddie Izzard, Boy George, Ru Paul, we’re not even talking about David Bowie, Prince or Kurt Cobain. Though these are all notable examples of celebrities making a mark on fashion by subverting the gender norms. 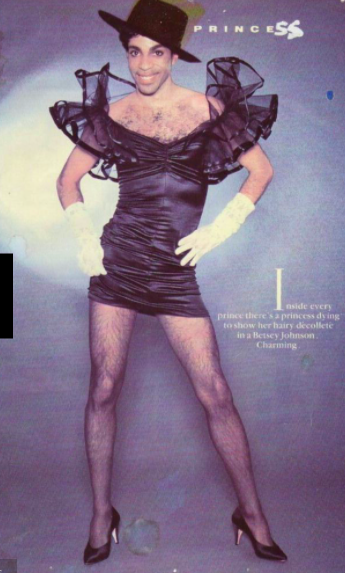 Gender fluidity in fashion isn’t a shiny new way for us to assert ourselves. It’s been a cyclical means for fashion to allow people break out of societal roles (or subvert oppression) stretching back over the last oh say, four centuries or so. We thought we’d take a mini deep-dive into the evolution of gender fluidity and crossdressing through the years and across the undulating centuries of stigma that have brought us right up to our mercifully accepting times of now.

In the 16th century, women weren’t allowed on stage, so men played all the female parts.
OG Lady McBeth? 100% drag. Hamlet’s ma? DRAG! First edition Juliet? Draggity drag drag drag! But then in the 18th centch the gals got to tread the boards, and the reversal began to occur of women playing male roles. Why? Well, it was just a different way of objectifying the fairer sex, truth be told, as women were a symbol of seduction even when crossdressed. It created a mystery around the female body to see them in masculine clothes. As was the case with Margaret “Peg” Woffington, an actress of the time who played as many men as she did women and was the hottest actress of the 18th century. 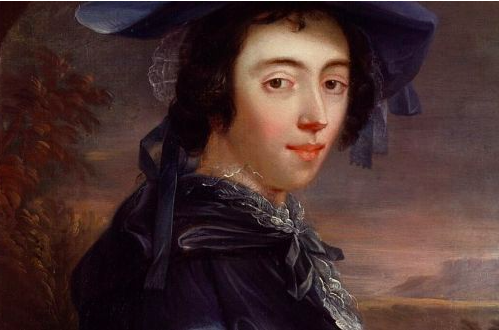 Aristocrats in the 18th century wore frills and fancy clothes that'd make Liberace look tame. They’d wear long, skirt-like tails, tight trousers to the knee, and a linen shirt with a collar and frills. Snow white stockings and heeled shoes were the norm, and corsets? Of COURSE-ets! Those waists didn’t cinch themselves! Honourable mentions go to the wig culture of the time too. Started by King Louis IVX and perpetuated by King Charles II, wigs were pretty much a must for high society. If syphilis is giving you a bad hair life, wig it up b*tch! 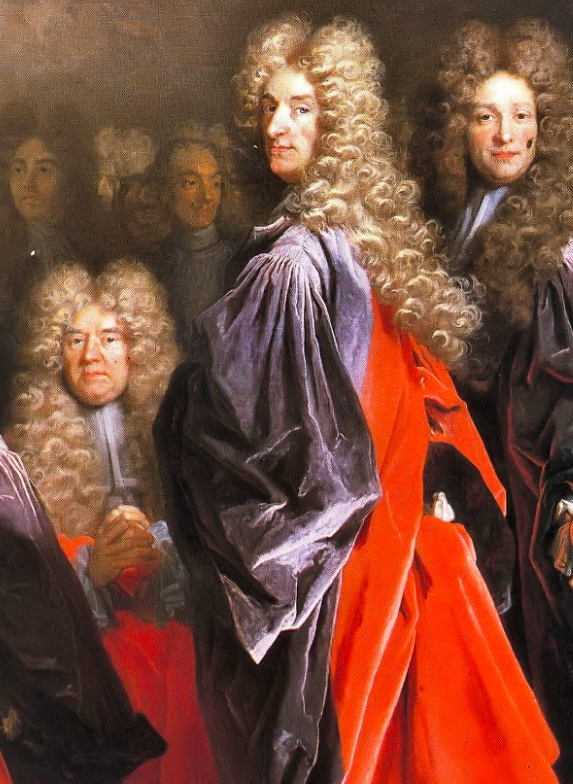 Around this time, the youth of the rich would head off on a gap year, or “The Grand Tour” as they used to call it (whereby they’d fanny around Europe on Papá’s coin in the name of getting a bit of life experience). They started coming back from France and Italy dressed to the absolute nines in Eurotrash. They dubbed themselves The Macaronis, went around in incredibly fancy ‘fits, with voluminous wigs, a full face of makeup giving zero fucks for the judgemental looks of others. 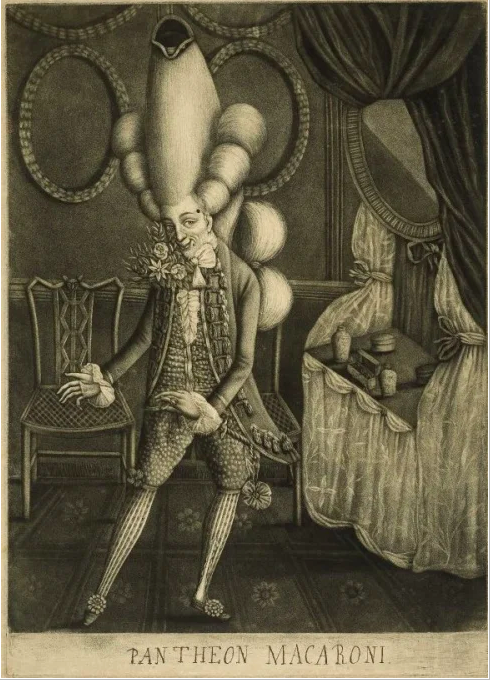 The Marconi's were eventually lampooned out of fashion, and in some ways, their fall from favour brought masculine identity into question and eventually kickstarted a western redefinition of masculinity. The frills and makeup went in the bin and were confined to women, and the high-octane style eventually was rejected as being unpatriotic after Britain fell out with the French. (booooo)

In the 19th century women dressed as men to fool the authorities, living as men and carrying out work they’d otherwise not be allowed to do. Some women had successful careers living as men as soldiers and sailors, which they did for many reasons, to follow their love interests, get better pay, or just fight for the flag! Women also dressed as men to ward off the inevitable threat of rape, assault or arranged marriage.

In 1825, Harriet Moore, a woman from Sligo in Ireland, who just wanted to make an honest few quid as a fella when her parents died, lived and worked as a man successfully for seven years. Her secret ended up being discovered by another woman and she was blackmailed into marrying the pregnant daughter of said woman, an arrangement she grudgingly accepted until the inconvenience of supporting a wife, child and mother-in-law ceased to be her jam. She absconded from the marriage to go back to her quiet life as a grafting man. She was caught up with and prosecuted for wife desertion. On the threat of the law, she fessed up to owning a uterus and was absolved of any legal obligations, at which point she was forced to shuffle off in the gender she’d been assigned at birth and get a shitty job in domestic service. “What a fucking melt” she declared at the time, as a reaction to her new fate. (ok yeah, maybe she didn’t say that at the time, we did, just there, but we know she was thinking it.)

Anne Lister, the legendary diarist of debauchery, and arse-kicking businesswoman of the day, wore a completely androgynous garb of head-to-toe black and was disparagingly labelled a man, but as a reasonably wealthy landowner and successful business boss, she used this to her advantage, entering politics, travelling the world unaccompanied and living her best lesbian life, before being a lesbian had really been invented. 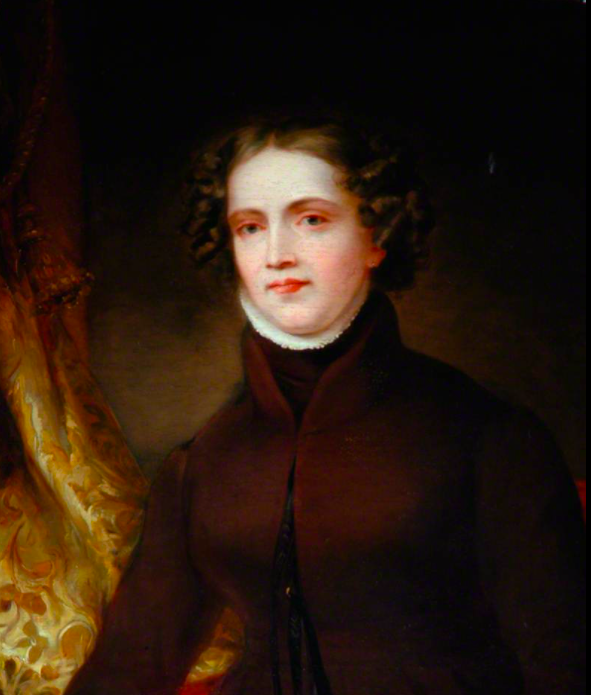 Crossdressing stuck two fingers up to the status quo, leaving gender norms, that were so central to cultural hierarchies, completely destabilised. The woman who became a successful man disrupted traditional notions of women as the weaker or second sex.

The idea that cross-dressing is a sexualised or secretive act performed in private bedrooms (though certainly in existence) was not the main reason why people historically donned the clothing of the perceived opposite gender. It was largely a multifaceted social phenomenon that had different meanings to different people at different times.

The 20th Century’s chaos brought crossdressing into its own for different reasons. During the chaos of WW1 soldiers dressed in drag to entertain themselves and each other, such as the legendary Timbertown Follies. These were the product of 1,500 or so members of the First Royal Naval Brigade, unfortunate enough to be imprisoned for the entirety of the war, in a Dutch camp they nicknamed the HMS Timbertown. They were treated reasonably well as they weren’t part of a conflict, so with four years to spare and nothing to do, they threw themselves into making a theatre and became fantastic drag artists out of necessity. The Timbertown Follies renown for their revues, word of which traveled across Europe. 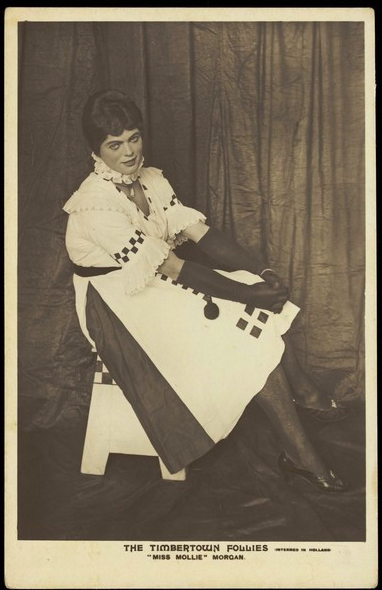 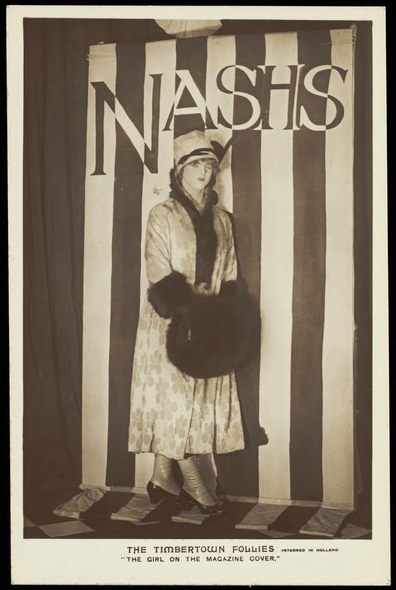 Meanwhile, the women left at home were doing men's jobs, donning the masculine gear that came with them, and finding their comfort and practicality to be far preferable. This was happening on the back of the New Woman movement of the late 19th and early 20th centuries. De-feminised androgynous dress became synonymous with women wanting to show how that they were independently minded, did not seek flattery from men, and were serious about their jobs. 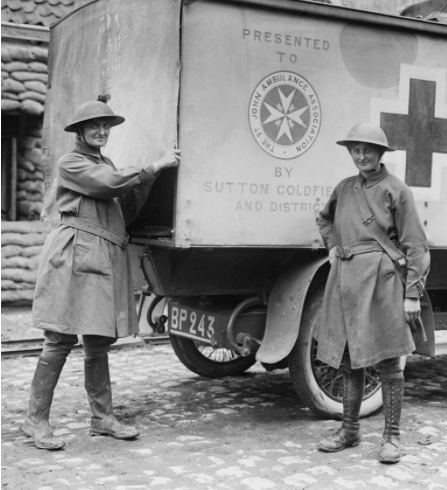 The suffrage movement also took off at this time, but ironically, the suffragettes stuck with highly feminised dress when marching, just to prove their point. (legends)

Both the wars completely upended the gender roles for men and women and with that came the fashions to go with it. Though society wanted women to just sftu and gtf back in the kitchen, the horse had bolted as they say, and tight corsets (for women) were ditched as fashion began borrowing from the wardrobes of men for the styles of the time. The (really divine) flapper style was a sharp and androgynous look that hid waists with a tubular design, but women were also going a step further with a super masculine style that teamed severe crop hairstyles with strictly tailored jackets and monocles, and gaiters. 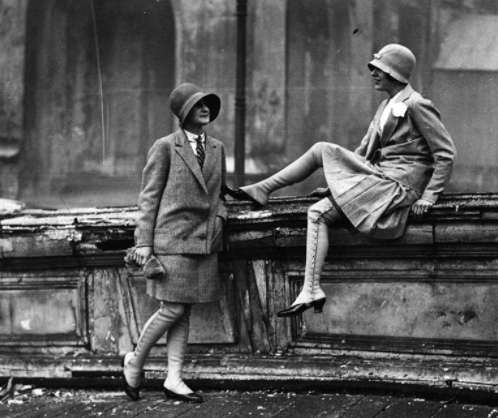 
Whilst crossdressing often had nothing to do with queerness, there were swathes of people who were dressing for their true selves, hiding their given identity and secretly doing so at the risk of ostracisation or even death. French filmmaker and archivist Sébastien Lifshitz compiled one of the most beautiful collections of imagery of crossdressers, collected over 25 years and initiated by his own curiosity as a gay teenager. His collection was shown in London in 2018 in an exhibition entitled “Under Cover: A Secret History of Cross-dressers” and displayed the full spectrum of motivations for crossdressing, queer, subversive, playful, political or otherwise. 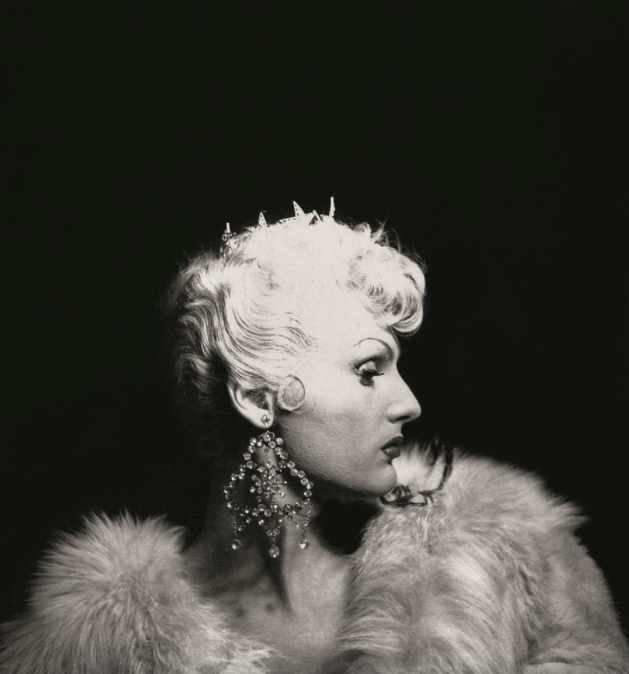 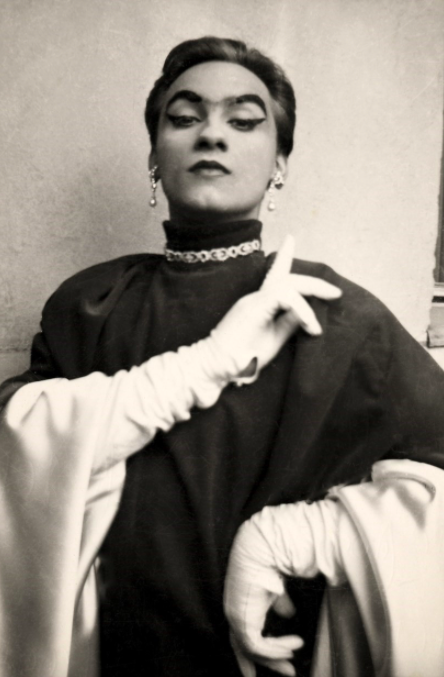 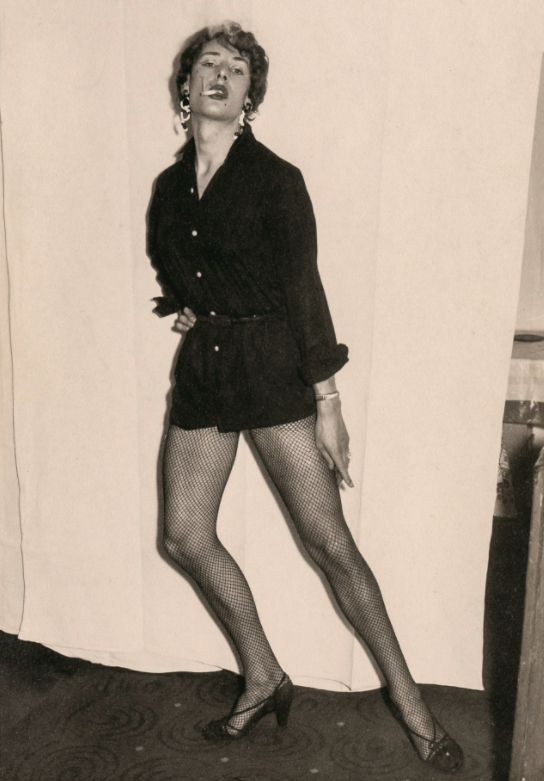 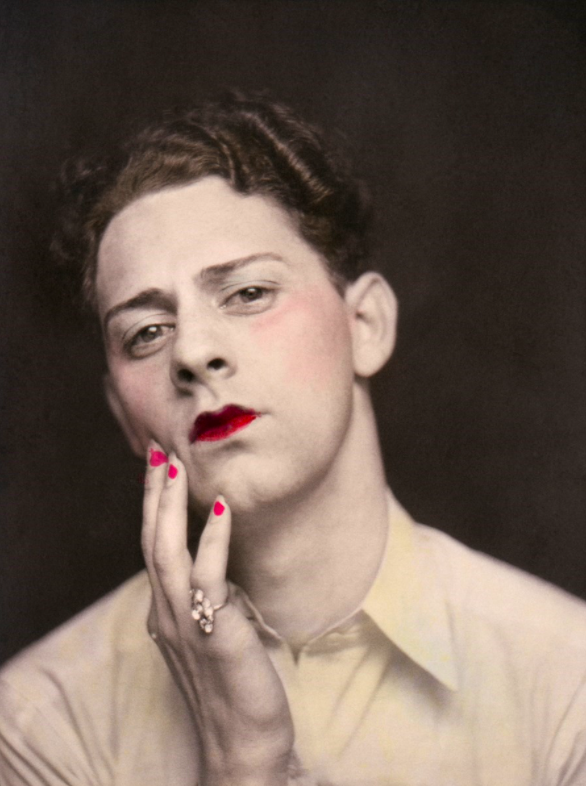 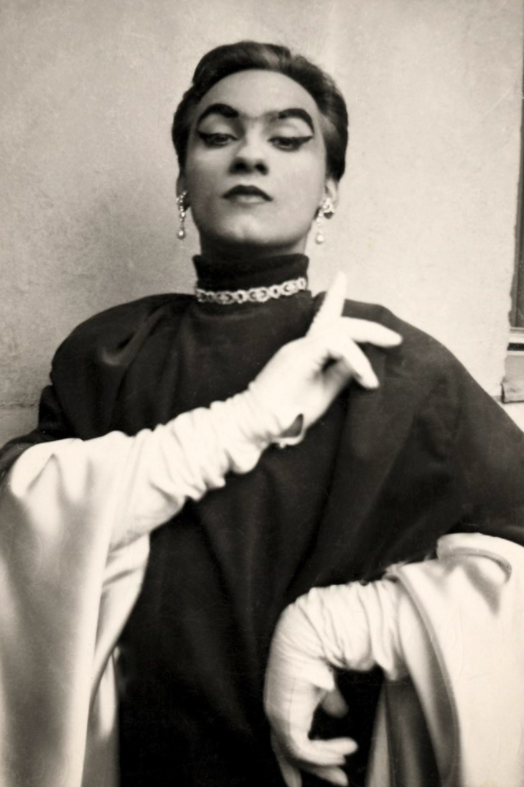 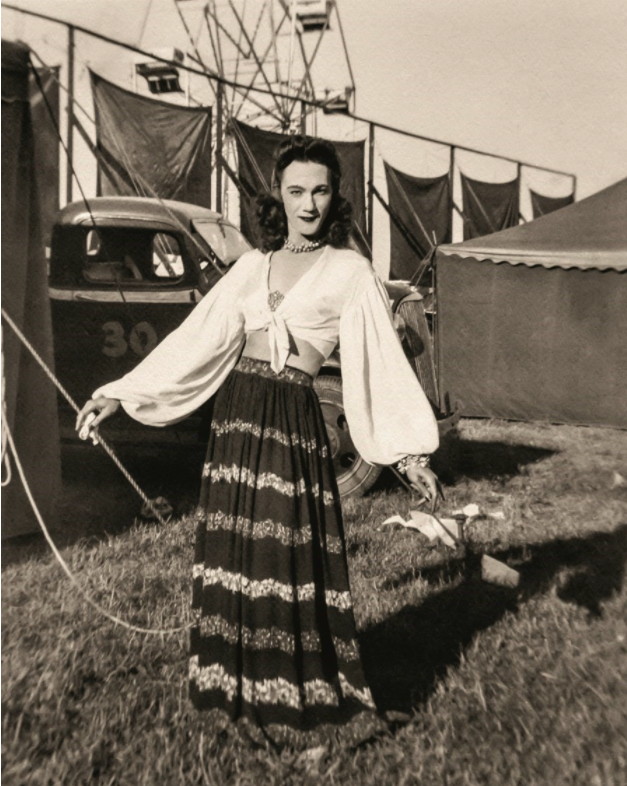 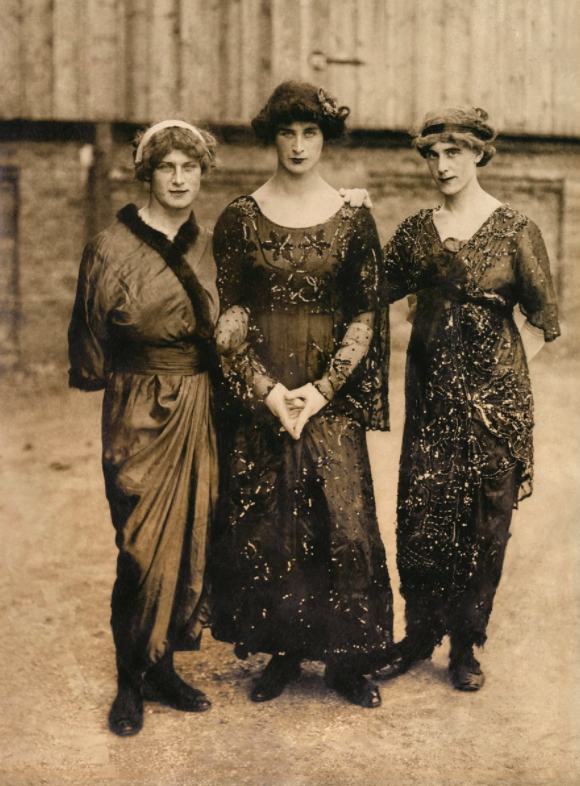 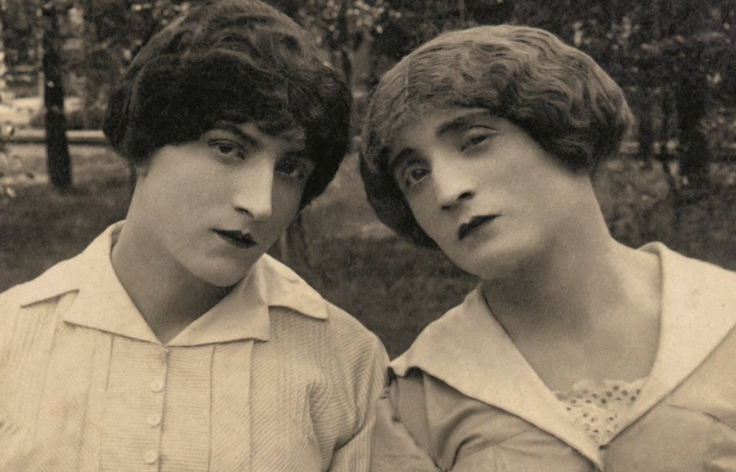 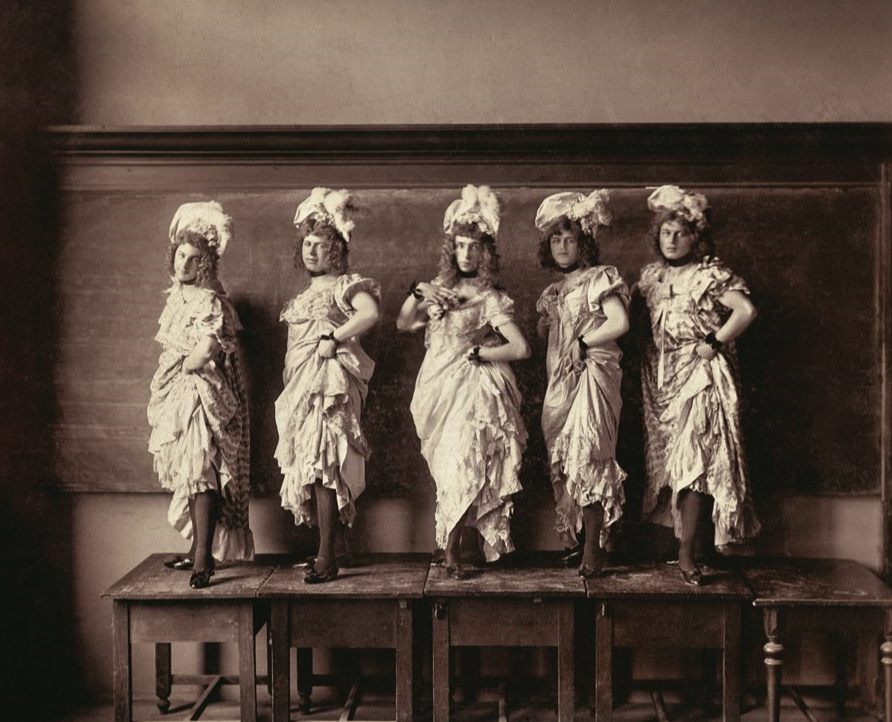 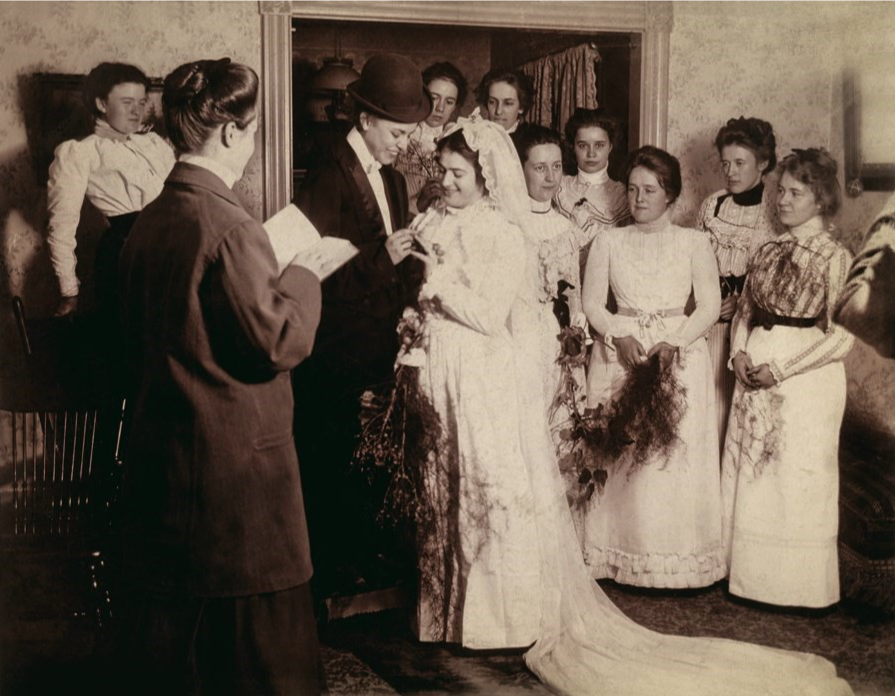 (Images from “Under Cover: A Secret History of Cross-dressers” by Sebastien Lifishitz. Source: Dazed)

Shakespeare always finds his way into these sorts of things and here he is again with the immortal words “The clothes maketh the man” or woman as the case may be. This quote rings true like a chorus of church bells for the human condition. Because while the soul’s identity might form who you are, your clothes will shout it from the rooftops, and these are the choices that empower us in our fashion.

Virginia Woolf wrote the 1928 novel Orlando as a thinly veiled biography of Vita Sackville-West, another gender-flouting dresser of her time who famously had an affair with Woolf.

In the book, the protagonist Orlando not only changes sex over the course of their life of 400 years, but falls in love with both women and men.

Woolf said the following of Orlando “The change of sex, although it altered their future, did nothing whatever to alter their identity.” leading her to the following quote from the book and its inference of the importance of our attire.

“Orlando ….was becoming a little more modest, as women are, of her brains ... The change of clothes had, some philosophers will say, much to do with it…They change our view of the world, and the world’s view of us.”

This quote is as true today as it ever was and as the lines that binarise gender are finally being erased in favour of a spectrum, we can look forward to a more free societal mindset and a fashion future that is ready for all.

Fashion inspires passion and when faced with the sartorial opulence that gives life to feminine fashion design, it’s not a surprise that the dopamine is...